Both Fetch and Freight have an internal computer which runs a Long Term Support (LTS) release of Ubuntu and an LTS release of ROS. These releases are intended to give long-term stability to the system.

Each robot ships with a default user account, with username fetch and password robotics. It is recommended to change the password when setting up the robot.

The majority of communication between components onboard Fetch and Freight happen via the internal Ethernet network. This network is located in the 10.42.42.0/24 subnet and connects the robot computer to the devices listed in the table below. As such, it is important that your building networks do not use the same subnet.

Never drive the robot with an Ethernet cable attached to the access panel.

Connecting the Robot to a Wireless Network¶

The easiest way to configure the wireless networking is to connect a monitor, keyboard, and mouse and use Ubuntu’s Network Manager interface.

For 14.04: Edit and uncomment the section for eth0 in /etc/network/interfaces

After making changes, restarting the robot will ensure changes for the ethernet port take effect.

Troubleshooting ROS Interactions with Robot Across a Network¶

External networking with the robot is typically done to provide an interface to various ROS capabilities. To ensure a working network setup between robot and PC, reference the following guide to the ROS_MASTER_URI and ROS_HOSTNAME environment variables. A key recommendation is to use hostnames instead of IP addresses for ROS_MASTER_URI and ROS_HOSTNAME. This will minimize issues with e.g. DHCP not being present or unexpectedly changing network behavior. 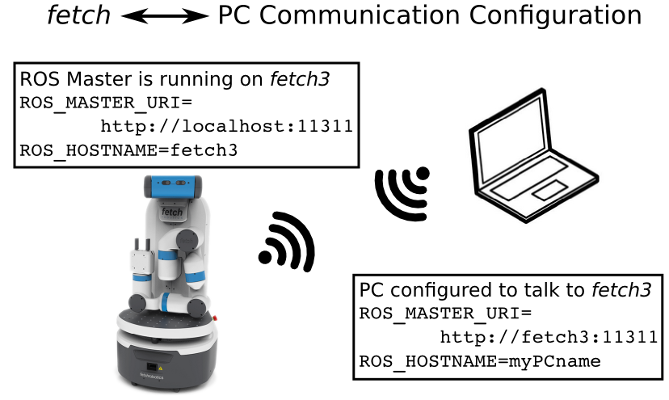 Note that the ROS_HOSTNAME is unneeded in the case where the robot and computer hostnames are addressable on the local network. (E.g. via DNS or entries in the file /etc/hosts)

A symptom of an incomplete setup may be that some ROS commands work, while others do not. Commands (such as rostopic list, rosservice list) retrieve information through the connection they create, while other commands (rostopic echo, many components in rviz) attempt to tell the robot a location to send info to via future connections.

It is recommended to install the chrony NTP client on both robots and desktops in order to keep their time synchronized. By default, robots do ship with chrony installed, but did not initially. To install chrony in Ubuntu on an older robot:

Fetch and Freight use systemd to start and manage various services on the robot. The following systemd services (aka ‘units’) start when the robot is booted:

Services can be restarted with the service command. For instance, to restart the robot drivers:

ROS logs are created in the /var/log/ros folder. The robot service’s logs are also sent to /var/log/ros/robot.log. This log file is a common place to check for information on errors, if the robot is not working. The other systemd services’ outputs are less often used, but can be viewed using e.g. journalctl -u roscore.

The mainboard of Fetch and Freight contains a USB audio device. While the device enumerates as a standard Linux audio device, we recommend using the sound_play ROS package to access the speakers. sound_play is automatically started as an upstart service when the robot starts. This service is pre-configured to have the correct group-level access to the audio system. If using the speakers directly through a Linux interface, be sure to add your user to the audio group in order to actually access the speakers.