The Fetch and Freight kinematics are defined by using the concepts of joints, links, and coordinate frames. The robot URDF (unified robot description format) model specifies the attributes (kinematic tree, names, ranges, etc.) of the joints, links, and frames of the robot. A link element in the URDF describes a rigid body with inertia, visual features, and coordinate frames. A joint element in the URDF defines the kinematics, dynamics, safety limits, and type (revolute, continuous fixed, prismatic, floating, or planar). Fixed joints are typically used to describe the relationship between two rigidly joined components in the robot.

The links for the Fetch and Freight are defined in the URDF description that are located in the fetch_description or freight_description package respectively.

Frames represent the coordinate frames of links, detected objects, sensors, or the location of another robot in the world. Frames are define relative to other frames and the transformations between each frame is tracked using TF.

A joints define the relationship between links and are defined in the URDF description that can be found in the fetch_description or freight_description package respectively. In the Fetch and Freight the majority of the joints are rotational, the torso is prismatic, and there are several fixed joints describing the location of sensors within the robot. Rotational and translational joints are represented similarly in the URDF, and joint forces are described as effort instead of force or torque. Position, and velocity are both used to describe linear and angular motion of a joint.

The home pose of the Fetch robot is used to describe the joint positions in a consistent manner. The home pose is defined as the robot arm straight out in front of the robot with all x-axes aligned, the gripper in the closed position, and the x-axes of the head parallel and aligned with the arm, in this position all of the joints are considered to be zeroed. The calibration reference for most joints are not at the joint zero and the URDF of the Fetch contains the offsets for each joint.

In general, the names for a link, a joint, and frame will be similar (e.g. shoulder_pan_link, shoulder_pan_joint, and shoulder_pan_frame). Short prefixes are used to describe the location of repeated components (i.e. drive wheels). The diagrams below show the link and joint naming conventions as well as the positive direction of joint motion. 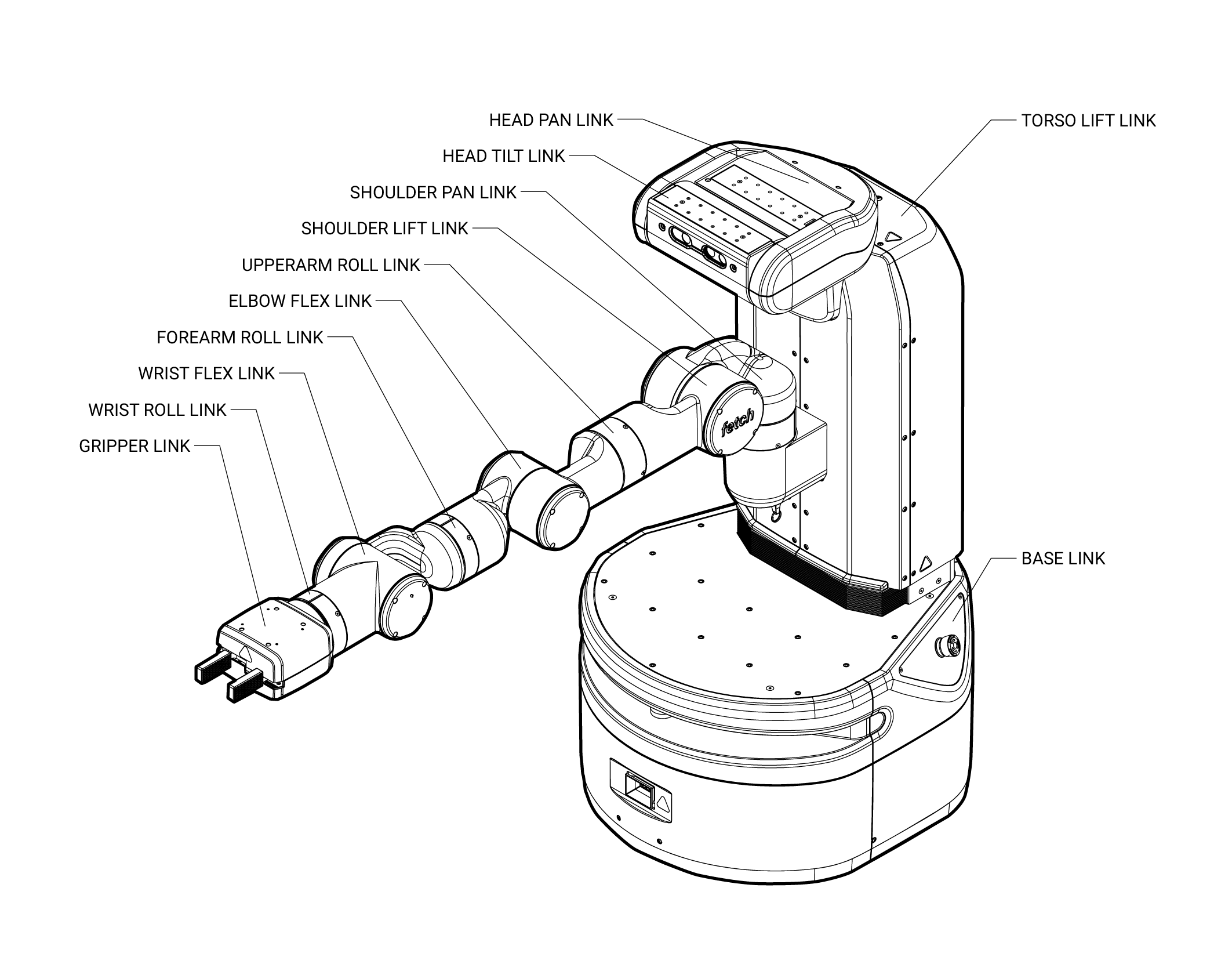 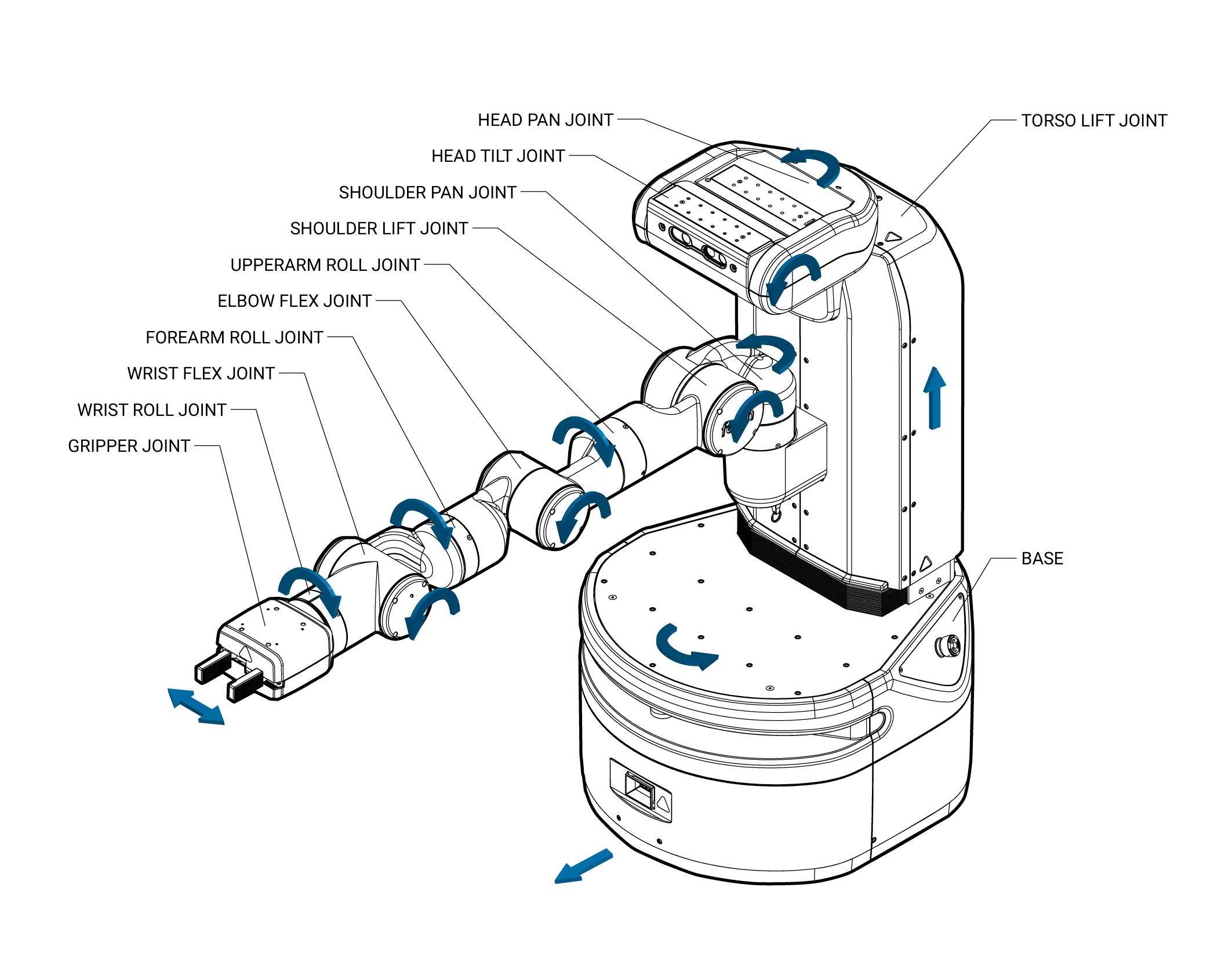 Do not operate Fetch or Freight before reviewing the mechanical information listed below.

Joint position, velocity, and force limits are implemented in the Fetch and Freight URDF file as well as in firmware. Firmware implements additional power limits. These joint limits control the range of travel of the mechanism and the allowable velocity to prevent over-travel. These limits are enforced by the controller, and are designed to prevent poorly commanded control efforts from damaging the robot or harming operators.

The limits below are from the Fetch and Freight URDF files. If a velocity or torque limit is not specified, no value is enforced.

The position limits for Fetch and Freight are specified below. These “hard limits” are the maximum travel for the mechanism.

Fetch and Freight both have mount points on top of the robot base. Fetch also has mount points on the head and gripper. The table below lists the fasteners that should be used and the max torques to use when installing fasteners. The spacing of the square grid of mount points is also included.

When mounting additional items on top of the base, a 6mm maximum thread engagement into the mounting holes must be maintained. Exceeding this maximum may cause the top plate of the base to deflect. On older robots, this depth may be limited to 4mm.

Internally, Fetch and Freight have a number of circuit boards, communication buses, and other components which handle power distribution and motion control. The system comprises: 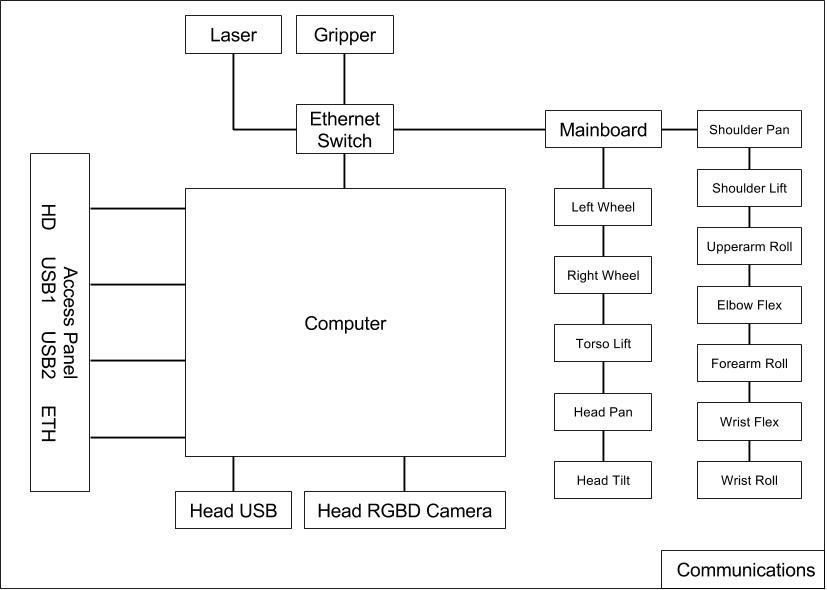 Fetch and Freight both have two 12V Sealed Lead Acid (SLA) batteries located in the robot base. The batteries are connected in series, providing the nominal 24V power rail for the robot. These batteries are kept charged by the mainboard (see Charging).

There are several breakers within the robot. These are designed in order to prevent damage to the robot if cabling should become worn or shorted out, or in the case of sudden, unexpected overload of a joint. The table below describes each breaker, using the names that are used in fetch_drivers and diagnostics:

When a breaker is disabled or tripped, power will no longer flow to the connected devices. In the case of MCBs, this means that they will not be able to communicate with the mainboard.

The power disconnect is on the lower back of the robot. This switch cuts the power between the battery and the mainboard. It also acts as a breaker, limiting the total current that can be delivered by the batteries. 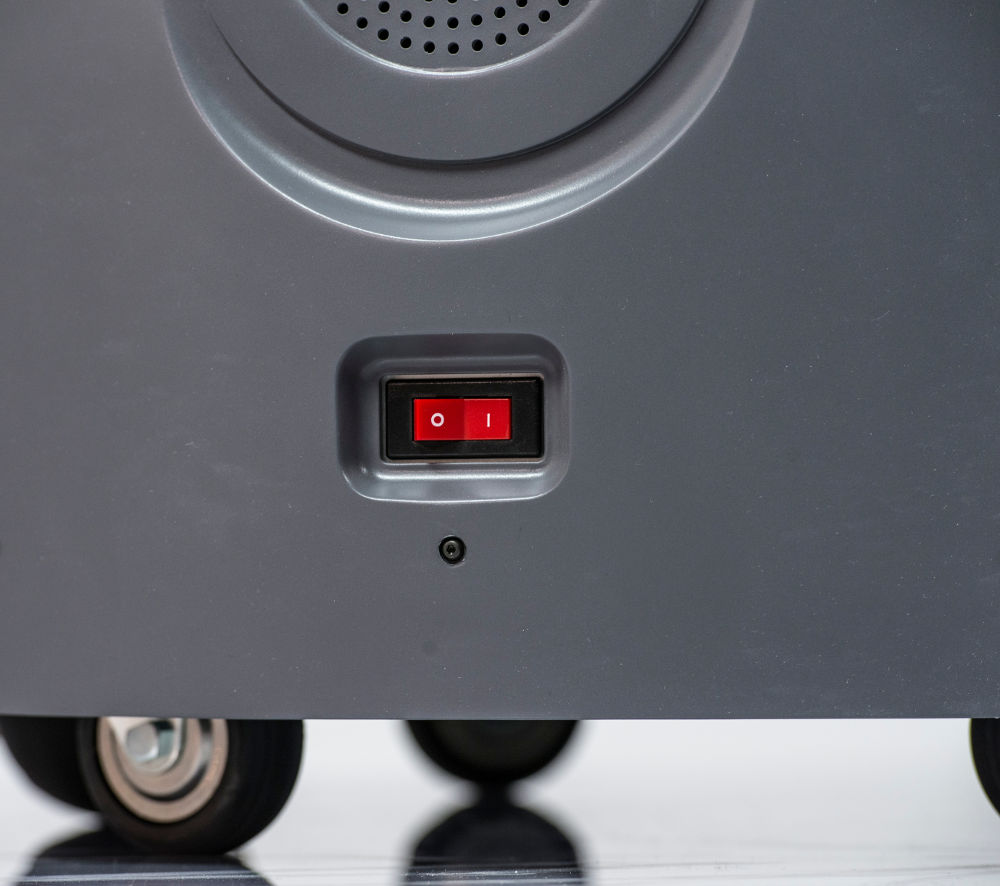 The runstop is used to stop all operation of the joints. It works by disabling the base, arm and gripper breakers. When the runstop is pressed, the drivers will not be able to communicate with the MCBs, and thus their position and other data will not update in RVIZ nor the runtime monitor.

Fetch and Freight both have an access panel with 2 USB, an Ethernet, and an HD Video port. All of these ports are connected directly to the onboard computer. In addition, Fetch has an extra USB port on the head. 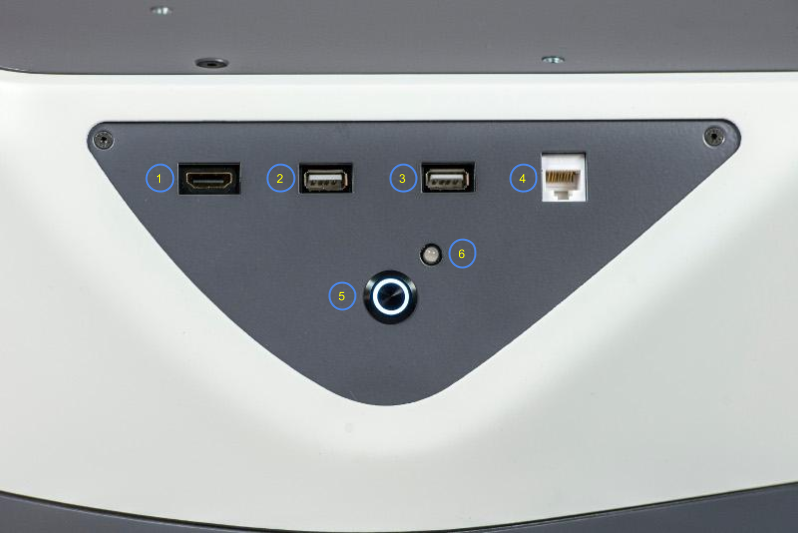 The access panel is also the location of the power button which turns the robot on or off. This switch is connected to the mainboard and will only work if the power disconnect switch (the red one on the lower back of the robot) is in the ON position. Pressing the power button until it lights up with boot the robot, including the computer. To turn the robot off, press and hold the illuminated power button on the access panel until it starts blinking. The button will continue blinking until the computer has successfully shut down, and then power will be disconnected.

Each joint has a dedicated motor controller board (MCB) with a dedicated microcontroller. The real-time components of the controls run on the MCBs, while the robot computer streams commands to the MCBs. 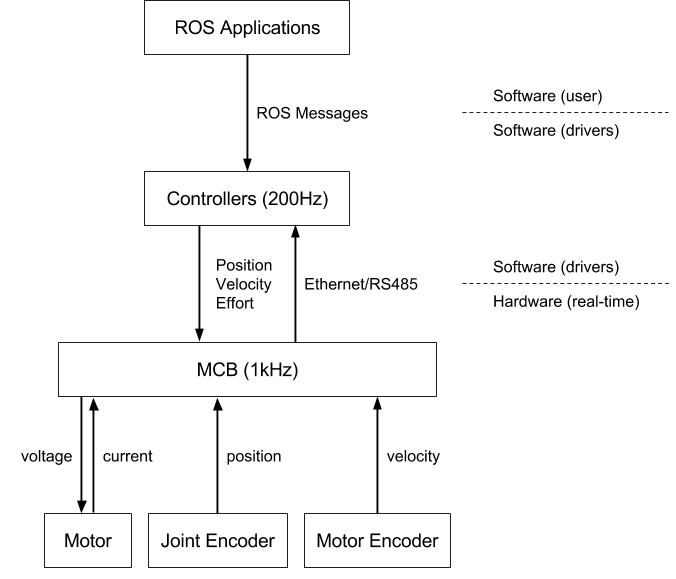 Each MCB returns the measured effort, velocity and position of the joint it is controlling.

Most users will want to use the high-level Arm and Torso ROS API, however, users can also create their own controllers as ROS plugins that run on the robot computer and send commands to the MCBs using the robot_controllers_interface package.

Both Fetch and Freight have a SICK TIM571 scanning range finder. The laser has a range of 25m, 220° field of view, 15Hz update rate and angular resolution of 1/3°. The laser publishes both distance and RSSI (Received Signal Strength Indication) to the base_scan topic.

Fetch has a Primesense Carmine 1.09 short-range RGBD sensor. This camera is best calibrated in the 0.35-1.4m range. See Head Camera Interface for details on the ROS API.